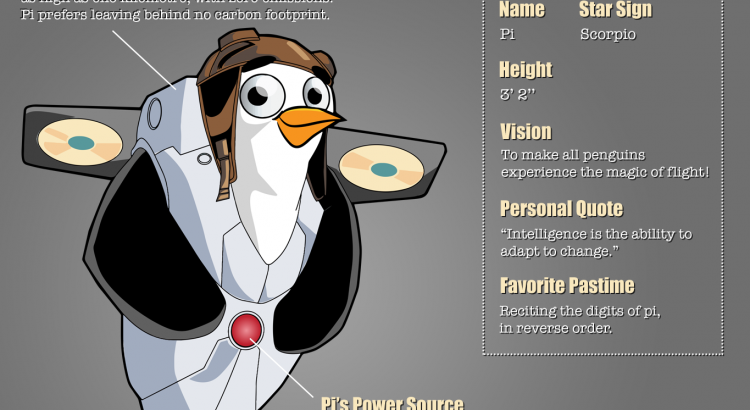 Penguins are said to be very social animals. And looks like there are things we can learn from them. A penguin is also the last bird you’ll think of flying.

But, Pi always wanted to fly. Alas! His body was not made to fly. And what’s worse! When Pi went to some hotshot penguins and said “I want to fly”, the hotshot penguins retorted, “You can’t fly. Don’t even try.” But Pi couldn’t take no for an answer. He went ahead and invented his own flying suit!

Ok, so why are we discussing Pi? At Teamie, we were looking for someone to act as a friendly guide to our users. Someone who’d take users through Teamie and make them feel comfortable. Someone who’d be there to help when the need arose. Someone we’d like to call our User Happiness Manager!

And as we interviewed one candidate after another and wrung our hands in utter hopelessness… that’s when Pi walked into our office. Or rather flew in with his self-made jet pack (which he prefers to call the Flying Suit).

Ashwin, the interviewer, almost spilled his Starbucks coffee onto his laptop. How else would you react if you saw a fully-grown penguin float into your office on a sunny afternoon?

“The name is Pi. I heard you were looking for a guide.” The voice was calm and confident.

Ashwin had watched Madagascar. So he didn’t wonder how penguins could talk. But, he did wonder if a penguin could be a guide. The only penguin he knew, loved to sit around and did nothing.

And so in typical Teamie fashion, he put Pi through a series of tough tests. Where others had chickened out, Pi stood firm and answered.

Finally, having emptied his volley of questions and his coffee cup, Ashwin asked, “Why do you want to join Teamie?”

“I heard Teamie is coming out with something new. Something called Dash.”

“Well, Dash is new. The world is often unkind to new creations. The new needs friends.”

Ashwin had watched Ratatouille too. He stood up in an instant and shook Pi’s hands (or flippers to be more accurate).

So that’s the story of how Pi joined Teamie! He will soon be making an entry to the Teamie platform, as part of a new project called Dash. Watch out for him. And yeah, don’t forget his name 😉

P.S: It is rumoured that penguins were always a part of the Teamie logo. Seems if you strain your eyes, you’ll be able to make out 3 penguins 🙂